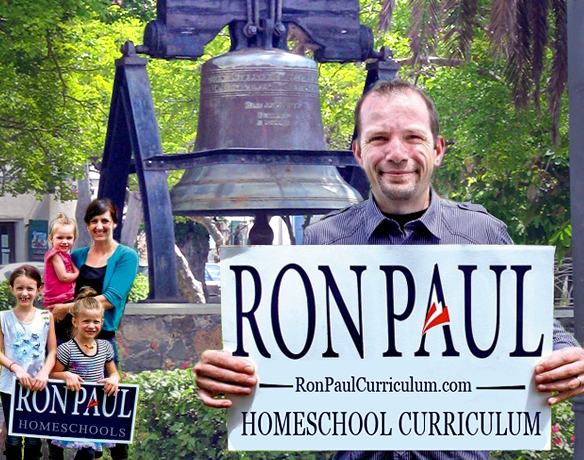 It’s no secret Ron Paul opposes public education as being unconstitutional and a dismal failure. Recently he announced a solution. It’s genius, really — and perhaps in the nick of time : The Ron Paul Homeschool Curriculum.  “Phase 2 of the Revolution,” The Ron Paul Homeschool Curriculum  is based on the “history of liberty” and teaches the “biblical principles of self-government.” Paul’s schooling alternative not only bypasses the establishment indoctrination camps mislabeled as public education here in America, it also guarantees his message will live on by creating future generations of liberty-minded young people with a penchant for Austrian Economics.

END_OF_DOCUMENT_TOKEN_TO_BE_REPLACED “The IRS is like the mafia. You pay for protection but you end up feeling impoverished, confused, and with no understanding of how your taxes are going to be spent.” – Mark Fidelman, Forbes.com

END_OF_DOCUMENT_TOKEN_TO_BE_REPLACED

What a coincidence Ron Paul gives this speech warning about the evils of computer surveillance and government databases in the same year as the title of George Orwell’s dystopian novel, “Nineteen Eighty-Four.“

This is a great opportunity, especially for parents who are reluctant to homeschool their children without the guidance of a structured curriculum. And it is great that it’s available free of charge for K-5. This makes it a great resource for unschoolers who may wish to use it not as a daily curriculum but only when the offerings pertain to a particular line of inquiry. –LMN

END_OF_DOCUMENT_TOKEN_TO_BE_REPLACED

PATRIOTS AND PAULIES POLITICS AND NEWS – An estimated 450 veterans and active duty military “marched on” the White House last February on President’s Day to show their support for Ron Paul’s run for President. During the demonstration the Veterans stood saluting for a duration of one second per each soldier that had died in combat or committed suicide since President Obama became Commander in Chief. The soldiers also did an about face turning their backs on Barack Obama’s White House.
END_OF_DOCUMENT_TOKEN_TO_BE_REPLACED

RON PAUL’S TEXAS STRAIGHT TALK – Last year more US troops died by suicide than died in combat in Afghanistan. More than 20 percent of military personnel deployed to combat will develop post-traumatic stress disorder (PTSD). Some 32 percent of US soldiers reported depression after deployments. More than 20 percent of active-duty military are on potentially dangerous psychotropic drugs; many are on multiple types. Violent crime among active duty military members increased 31 percent between 2006-2011.

END_OF_DOCUMENT_TOKEN_TO_BE_REPLACED

Ron Paul Makes His Case for Liberty on College Campuses

Ron Paul plans to deliver speeches on college campuses next year and beyond, continuing his message of liberty and reducing the size of the  federal government. In an interview with The Hill, the retired Republican Rep. from Texas clearly indicated that he  isn’t ready for the rocking chair.

END_OF_DOCUMENT_TOKEN_TO_BE_REPLACED

We can’t think of a better way than this blast from The Ron Paul Family’s past to wish you and your family Happy Holidays and Merry Christmas.  Enjoy. ~ Kristi 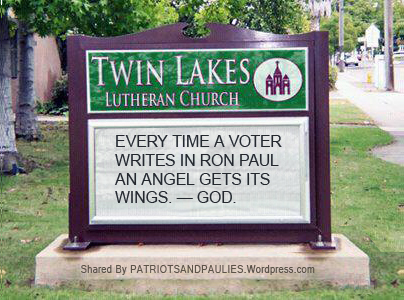 “Every time a voter writes in Ron Paul, an angel gets its wings.”

When All Else Fails Blame the Paulbots

(COMMUNITIES.WASHINGTONTIMES.COM) — Suddenly, Ron Paul’s supporters are relevant. You remember Ron Paul — that old Republican guy who ran for president. His non-interventionist foreign policy ideas were considered kooky during the Republican debates but have since landed him interviews on Fox.

He is the guy who barely cracked 10 percent in the primaries but managed to attract tens of thousands of people, from all walks of life, to his rallies during the primary season. People lined up to hear Paul speak about free-market economics and Constitutional government.

Yet his lively supporters were dismissed as “Paulbots” and “Paultards.”

But if Breitbart.com, Glennbeck.com and others are correct, the Republican nominee, Mitt Romney, may have difficulty defeating Barack Obama if the Paulies don’t fall in line and vote for Mitt.

END_OF_DOCUMENT_TOKEN_TO_BE_REPLACED

About one-hundred delegates from all over the country loudly chanting “So Goes Maine, So Goes The Country” march out of the Republican National Convention sympathetic to the plight of the Ron Paul Maine delegates who were not seated at the convention in Tampa, Florida August 29, 2012. (Mark Boster/Los Angeles Times) See it here: http://flic.kr/p/dWEgNu

Paul Ryan Is No Ron Paul

But many see the naming of Paul Ryan as unimpressive and even premature and just another indication of a desperate move by Mitt Romney to distract from the idea that the “presumptive nominee” has in truth, been fighting for his political life.

END_OF_DOCUMENT_TOKEN_TO_BE_REPLACED

“When the Fed talks about independence, what they’re really talking about is secrecy. What the GAO cannot audit is monetary policy. It would not be able to look at agreements and operations with foreign central banks, and governments, and other banks, transactions made under the direction of the FOMC [Federal Open Market Committee], and discussions or communications between the board and the Federal Reserve system relating to all those items. And why this is important is because of what happened 4 years ago. It’s estimated that the amount of money that went in and out of the Fed overseas is $15 trillion. How did we get into this situation where Congress has nothing to say about bailing out all these banks?”

Congressman Ron Paul Before the U.S. House of Representatives, Committee on Financial Services, Hearing on HR 1098: the Free Competition in Currency Act

End the Fed is available online at Amazon.com.

John Maynard Keynes once stated that “There is no subtler, no surer means of overturning the existing basis of society than to debauch the currency. The process engages all the hidden forces of economic law on the side of destruction, and does it in a manner which not one man in a million is able to diagnose.” Such a situation is exactly what faces this country today, as the Federal Reserve seems hell-bent on destroying what little purchasing power remains of the U.S. Dollar.

END_OF_DOCUMENT_TOKEN_TO_BE_REPLACED

What Would Really Happen If Ron Paul Were To Be Elected President? (LewRockwell.com) So what would really happen if Ron Paul were as elected President?

President Paul would immediately push for $1 trillion cut in federal spending (per year, not the $3 trillion that Democrats proposed over 10 years with half of that from increased taxes.)

President Paul would have the authority as commander-and-chief to withdraw troops from overseas, within limits of treaty commitments which must be honored (US supplies defense for Saudi Arabia, many other nations.) To the extent possible, the US would cease being the world’s policeman and plunderer of foreign economies (Iraq, Libya). The US would cease being a war economy. President Paul would also push to…

PAULTICAL TICKER with Jack Hunter (RONPAUL2012.COM) – I keep reading these stories about what happened in Nebraska yesterday, where phrases like “Ron Paul’s last stand” and reporters saying things like “it’s all over for Ron Paul” are used liberally.

This is stupid. These reports are stupid. They may be accurate in the immediate technical electoral sense, but are wholly inaccurate in the much more pertinent and larger sense when reporting on anything concerning Ron Paul and his very large, vocal and influential movement.

END_OF_DOCUMENT_TOKEN_TO_BE_REPLACED 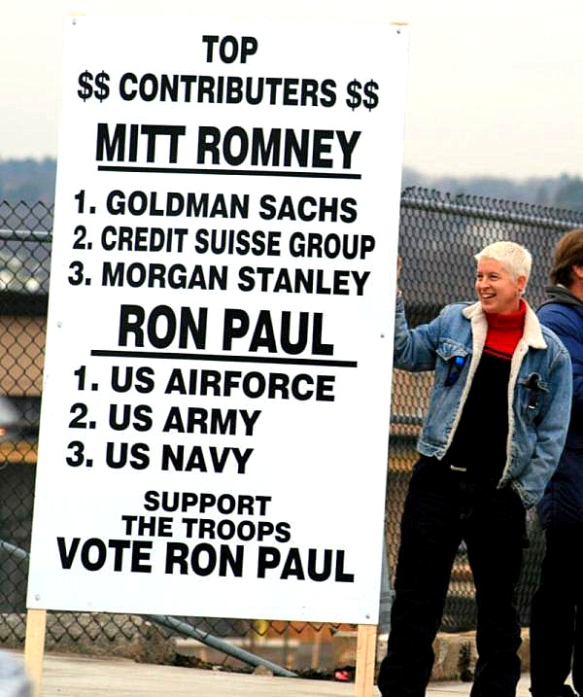 KRISTI KIRK (PATRIOTS AND PAULIES POLITICS & NEWS) – Okay class, this is an easy one. There’s no doubt that the wishes of political campaign contributors ultimately influence public policy. In essence, political candidates “are” the donations they keep. With that in mind, which GOP presidential hopeful would you rather elect to office?

END_OF_DOCUMENT_TOKEN_TO_BE_REPLACED

Ron Paul is the Best Option in Election 2012

Ron Paul is the Best Option in Election 2012

(PolicyMic.com) – During the 2008 Presidential campaign, I (along with many others) tried to argue that there was no legitimate difference between the grumpiest old man John McCain and the constitutional law professor turned Hope and Change motivator Barack Obama. It was clear that neither candidate was going to rollback the war profiteering military industrial complex. McCain’s hawkish attitude towards oil rich foreign lands, including his infamous “Bomb, Bomb, Iran” ditty, and Obama’s foreign policy adviser of choice, Zbigniew Brzezinski, who founded Al-Qaeda (at that point as a foil against the Soviets in Afghanistan) and authored The Grand Chessboard were tell-tale signs that the imperialist foreign policy would continue unabridged. It was also clear that neither candidate intended on curtailing the runaway casino financial system that benefits the 0.1% at the expense of the taxpayer. Both McCain and Obama stressed the urgency of the bailouts that sent trillions to Wall Street — who just happened to be the main campaign contributors for both candidates.

END_OF_DOCUMENT_TOKEN_TO_BE_REPLACED 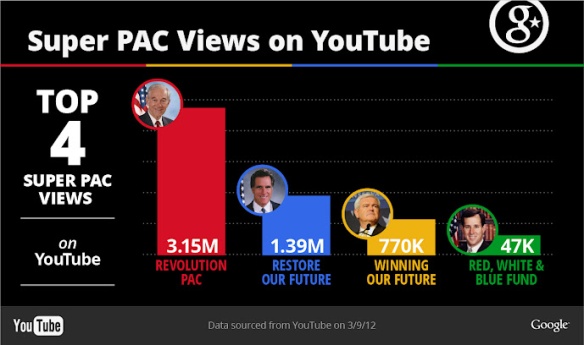 From James Trent (Google Plus)

END_OF_DOCUMENT_TOKEN_TO_BE_REPLACED

This is great. It is wonderful to hear all these leftists saying Ron Paul is Right!

PATRIOTS AND PAULIES (News & Politics) – “We have been tricked into ‘volunteering’ into the English/European version of literal slavery. They OWN your body – illegally.” — Roger Sayles (http://sovereign2serf.wordpress.com/) (Photo Credit: RonPaulQuoteVisualizations)

PAULTICAL TICKER with Jack Hunter (The Daily Caller) – Ahead of the Supreme Court’s Thursday ruling on Obamacare, Texas Republican Rep. Ron Paul explained that government is already too involved in health care…

“It is obvious that Obamacare’s legal apologists either are wholly ignorant of constitutional principles, or wholly lawless in their blatant disregard for those principles,” Paul wrote on his online feed, “Texas Straight Talk.”

END_OF_DOCUMENT_TOKEN_TO_BE_REPLACED

I recorded a video update about the upcoming Republican national convention and about an event of our own that we are planning for Sunday, August 26th. I hope you’ll take a few minutes to watch it… Ron Paul – FB

((Serfs Up!)) Patricia Walsh writes: YES!!! The ideas/philosophy…the movement is what is important…it is bigger than any one person…clear to me that Ron Paul knows this and has known it all along…he has said as much more than once… From Sovereign to Serf – FB

Why Ron Paul conceding he won’t be president and Rand Paul supporting the presumptive GOP nominee are but trivial anecdotes to the obvious and ongoing success of the most transformative political movement of our time: The rEVOLution.

PATRIOTS AND PAULIES (Politics & News) – The Ron Paul supporter (Paulie) posing with President Barack Obama in this photo is the man – pulling off a harmless Paulie prank on the Obama camp that resulted in one of the funniest Barack Obama pictures of the 2012 election.

END_OF_DOCUMENT_TOKEN_TO_BE_REPLACED 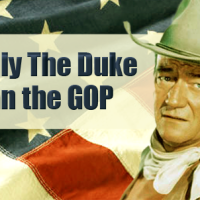 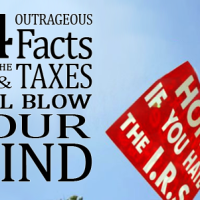