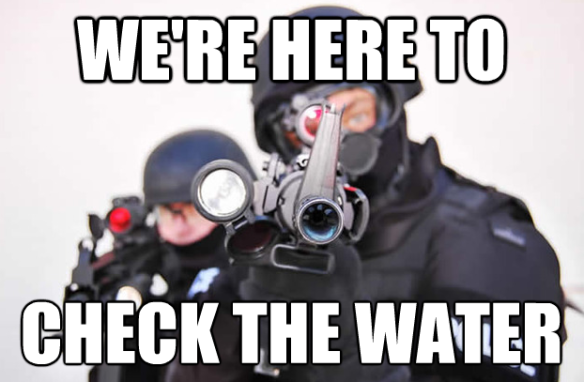 Though most Americans know agents within the Drug Enforcement Agency and the Federal Bureau of Prisons carry guns, agencies such as the Library of Congress and Federal Reserve Board employing armed officers might come as a surprise.

The recent uproar over armed EPA agents descending on a tiny Alaska mining town is shedding light on the fact that 40 federal agencies – including nearly a dozen typically not associated with law enforcement — have armed divisions.

The agencies employ about 120,000 full-time officers authorized to carry guns and make arrests, according to a June 2012 Justice Department report.

The incident that sparked the renewed interest and concern occurred in late August when a team of armed federal and state officials descended on the tiny Alaska gold mining town of Chicken, Alaska.

The Environmental Protection Agency, whose armed agents in full body armor participated, acknowledged taking part in the Alaska Environmental Crimes Task Force investigation, which it said was conducted to look for possible violations of the Clean Water Act.

However, EPA officials denied the operation was a “raid” and didn’t address speculation about whether it was connected to possible human and drug trafficking.

“Imagine coming up to your diggings, only to see agents swarming over it like ants, wearing full body armor, with jackets that say “POLICE” emblazoned on them, and all packing side arms,” gold miner C.R. Hammond told the Alaska Dispatch.

The other federal agencies participating in the operation were the U.S. Fish and Wildlife Service, the Bureau of Land Management, the Coast Guard, the National Oceanic and the Atmospheric Administration and the U.S. Park Service.

The Fish and Wildlife Service, Bureau of Land Management and Park Service are among 24 federal agencies employing more than 250 full-time armed officers with arrest authority, according the federal report, which is based on the 2008 Census of Federal Law Enforcement Officers.

The other 16 agencies have less than 250 officers and include NOAA as well as the Library of Congress, the Federal Reserve Board and the National Institutes of Health.

The number of federal departments with armed personnel climbs to 73 when adding in the 33 offices of inspector general, the government watchdogs for agencies as large as the Postal Service to the Government Printing Office, whose IG has only five full-time officers.

The EPA defended its use of armed officers, after the Alaska incident.

Read the rest of the story on FoxNews.com …